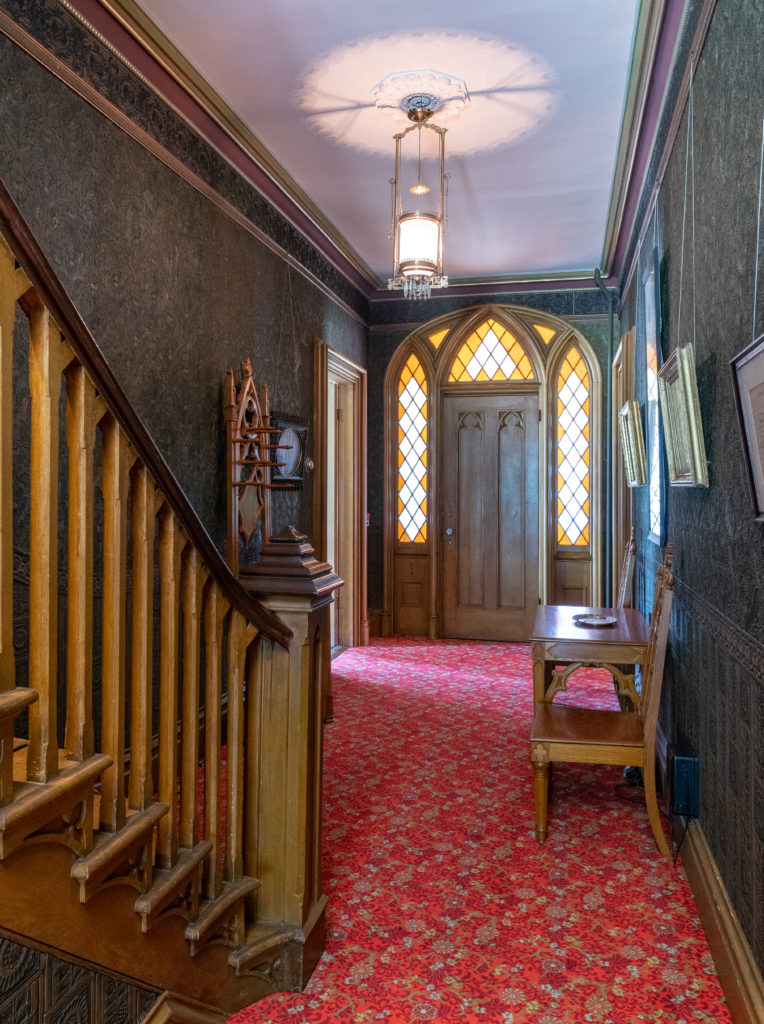 It is tempting to think of the entrance hall at Roseland Cottage as a visitor’s first impression of the house, but the cottage makes a strong impression well before anyone enters—the unconventional color, the parterre garden which guests would view from different vantage points as their carriages rounded the drive, and the Gothic Revival design.

The Gothic motifs continue in the entrance hall. The hallway is defined by Gothic decorative detailing, including original Thomas Brooks furnishings. None makes a more powerful statement than the entrance itself, which appears much like the door to a church. And that is no accident. The impulse to revive the Gothic was in part a moral or religious one. Just as medieval cathedrals stood as testimony to the power of the church and the power of people’s faith, these Gothic Revival buildings were thought to have a similar testimonial purpose. Residing in a Gothic Revival home sent a self-proclaimed message that moral, God-fearing people lived inside.

The design of the front door suggests the trinity, with three stained glass arches merging into one. Pointed arches on the door and on the newel post, and the stylized trefoils decorating the sides of the stairs add Gothic elements. The carpet is a reproduction based on a remnant that was found at the top of these stairs.

The 1880s wallcoverings in Roseland Cottage are a type known as Lincrusta-Walton or Lincrusta. Invented by Frederic Walton in England in 1877, it’s produced by pressing a mixture of wood pulp and linseed oil onto a fabric or paper backing to create a raised pattern meant to look like richly tooled leather.  Beginning in 1883 Lincrusta was produced in the Stamford, Connecticut, factory of Frederick Beck & Co.

In the 1880s, perhaps in response to entertaining dignitaries and politicians, Henry and his second wife Ellen undertook a major redecoration of the public rooms, bringing them up to date with the latest fashion. Lincrusta was added to all the public rooms. In the hall at Roseland Cottage, it includes a dado with a stylized sunflower design beneath a large scale damask pattern. At the ceiling, not visible in this image, is a frieze with interlacing rosettes.  For more information on Lincrusta, see Architecture, Design, and Style: Interiors.

In the opening address celebrating the completion of the Brooklyn Bridge in 1883, former U.S. Congressman and New York City Mayor Abram Hewitt rhapsodized: “It stands before us today as the sum and epitome of human knowledge; as the very heir of the ages; as the latest glory of centuries of patient observation, profound study and accumulated skill, gained, step by step, in the never-ending struggle of man to subdue the forces of nature to his control and use.” When Bowen redecorated Roseland Cottage in the late 1880s, this lantern was a suitable celebration of Bowen’s own achievements. It also served as a reminder that this was a Brooklyn family that summered in Woodstock. The lamp, originally fueled by gas, was adapted to oil or kerosene–Woodstock and Roseland Cottage never had access to gas–and later adapted for electricity.